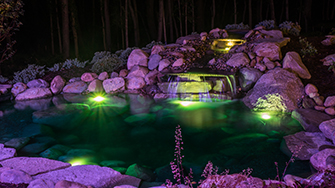 ABOVE LEFT: Besides providing safety and security, and enhancing the beauty of this model house and landscape in Ann Arbor. Mich, the owners wanted the lighting system to be colorful and flexible. D.A. Alexander & Company installed one that was developed by Lumenilaire, who also handled the design management of this project. The system consists of two types

of fixtures and a wireless controller, which is operated by a custom smart phone app that can control each fixture‘s color and intensity by activating the separate red, green, blue and white LED chips in the RGBW LEDs (see sidebar) and adjusting the voltage to each chip, leading to almost countless color options.

ABOVE RIGHT: Determining and locating the correct position and properly securing the model 31027 underwater light fixtures, and routing the wires leading to them was cited as the biggest challenge on this project. The water feature boulders are illuminated by ambient light coming from the [model] 3527 up lights mounted on the ground with 12-watt lamps and 90-degree beam spreads to highlight nearby trees.

RGB LEDs contain three LED chips, a red, green and blue one, and the combination of these covers the full spectrum of color. This includes white light, which is created by mixing all three equally but it is not a “true” white light according to Jeff Golota the general manager of Lumenilaire. RGBW adds a white LED that allows a true white. Golota estimates that RGBW makes up only about 5 percent of the market now but is growing.

The reasons for landscape lighting are many. For home builders Toll Brothers, it was specified to enhance the design of a model home in Ann Arbor, Michigan, and to be able to add color at their discretion, such as during holidays and special events.

It was also a priority that the system be a smart, energy saving solution. To this end, the home owners chose to work with Lumenilaire, a somewhat new venture that developed its own lighting system that give wireless control from a smart phone or tablet of each individual fixture’s color and intensity.

Their system consists of various landscape lights that the company has designed, engineered and built to their specifications; a custom smart phone app; and a wireless lighting controller called Lumen-Link that has no maximums on the number of lights it can operate within a distance of up to one hundred feet. With this setup, the number of color options is virtually limitless.

Though the company regularly performs local installations, averaging one to two per month, the scope of its work on this one was project management, which included the design and placement of light fixtures, configuration of the app and lighting system, and creation of the special lighting setups.

The installation contractor was D.A. Alexander & Company, a landscape design/build firm from nearby Livonia, Michigan. Model 3527 uplights were used to illuminate the trees. Model 31027 underwater lights were installed in the water features.

The crew of three took one, long, day to install the low voltage system. Then there were a couple of night time visits to tweak the lights, design multiple scenes and show the client the app’s operation.

And as a result, the model home gives a more colorful night time experience to visitors and neighbors.